We're sorry, but it appears that you are using an anonymous proxy. To prevent fraudulent voting, we don't allow votes from anonymous proxies.

This contest requires users to be registered in order to vote.

You must be a registered user to submit a joke.  But registering is FREE and don’t worry, we only need a name and e-mail address, and we don’t sell or share your information with any third-parties (see Privacy Policy).

You must complete account validation before submitting jokes. Click here to go to your profile page to complete the process.

We’re sorry, but your browser settings indicate that you don’t want to be tracked.  You can either disable that setting or simply register for a FREE account, so we’ll know that you want us to track your preferences and feedback.  Don’t worry, we only need a name and e-mail address and we don’t sell or share your information with any third-parties (see Privacy Policy). 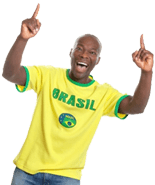 In our quest to bring laughter to the world and get you through the day, our expert humorists select a great joke of the day. Our most recent selections are archived for you here. Want them delivered straight to your e-mail each morning, just register and opt-in to our daily or weekly jokes.

I was at my bank today waiting in a short line. There was just one lady in front of me, an Asian lady, who was trying to exchange yen for dollars. It was obvious she was a little irritated. She asked the teller, "Why it change? Yesterday, I get two hunat dolla of yen. Today I only get hunat eighty? Why it change?" The teller shrugged his shoulders and said, "Fluctuations." The Asian lady says, "Fluc you white people too!"

If a man and a woman get married in California and move to Seattle, Washington are they still brother and sister?

A Californian and an Texan were deer hunting in the brush of south Texas when an illegal alien runs across a clearing. The Texan takes careful aim, shoots and kills him. "You can't do that!" cried the Californian. "It's legal here in Texas " replies the Texan.

Later that night the Californian goes to town to buy some beer from Walmart. He puts the beer on the roof of his truck and while he's making room behind the seat, an illegal alien runs by, grabs the beer and runs away. The Californian draws his pistol, shoots and kills him. As he is retrieving his beer the police come and arrest him.

"But I thought it was legal to shoot illegal aliens here in Texas!" protests the Californian. "Well, yeah," says the cop, "but you can't use bait."

Returning from his emergency meeting with the Oscar nominations, Al Sharpton stopped at his local Sears store to purchase a new washing machine.  As he looked at the display models he realized that nearly all of them were white.  He began to complain and the clerk called the store manager. "What's the problem here, Reverend?" Sharpton pointed at the machines and loudly bemoaned the fact that most of them were white.

The manager replied, "Well Reverend, it's true that most of the washing machines are white, but if you'll open the lids, you'll see that all the agitators are black."

Elle McPherson, Cindy Crawford, and Naomi Campbell are going by air to a photo shoot. Halfway through the flight the plane had engine trouble, the pilot warned the girls to assume the crash position, just in case they went down. Elle put on more make-up saying, "They always rescued the beautiful ones first.' Cindy donned her jewelery claiming, "They would rescue the richest one first," upon which Naomi, threw off all her clothes, pressing herself against the window saying, "You're both wrong, the first thing they look for is the Black Box"!